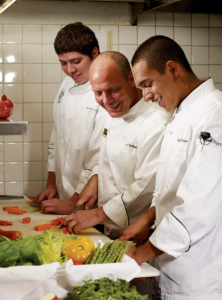 Hosted by La Tour Restaurant and Bar
Event will feature a 1 hour reception with Hors d’Oeuvres paired with cocktails and beer. Special 6 course dinner with wine pairings. Prepared by several of Chef Paul’s former students from 2000 – 2007 who have gone on to manage their own kitchens and open and run their own restaurants. Their participation in the ProStart program provided them a solid foundation for success.
Chef Paul Ferzacca from La Tour has been the Battle Mountain High School ProStart team mentor of more than 11 years.  The idea for this reunion came to Chef Paul when he ran into a past student, Bart Clark at Loaded Joe’s, a cafe where the past BMHS ProStart member was working. Some of the Proceeds will be donated to the ProStart Program.
Featured Chef’s
Chef/Owner Paul Ferzacca – La Tour Restaurant and Bar
Chef/Owner Riley Romanin – Hooked and Revolution
Executive Chef Bart Clark – Loaded Joe’s
Chef/Owner Andrea Knight – Noshery Cafe
Executive Chef Matt Thompson – Williams and Graham
General Manager Colby Lefebvre – Moe’s Original Bar B Que
Tuesday, December 15, 2015
6:30PM
$150 per person (includes tax and gratuity)
Reservations recommended
Call now for reservation 970-476-4403 or book online

Keg of La Cienega
Named for a road, named for a song, named for a moment…La Cienega gives you what you need and will have you coming back for more. This farmhouse ale is a tip of the cap to the mining histories of both colorado and the hainaut region of belgium. “as saison was considered the drink of farm workers, grisette was the brew of the miners.” vinous in nature from the nelson sauvin hops and a touch of funk from brettanomyces. for an almost 8% beer, this dry ale goes down very easily.  7.9%, 25 ibus